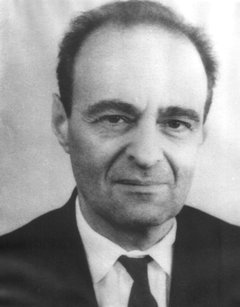 In 1943, MI Karnovsky was awarded the scientific degree of Doctor of Technical Sciences, in 1945 he was approved in the academic rank of professor and worked at the department of acoustics and acoustoelectronics until the last days of life. In 1972 the Problem Laboratory of Hydroacoustics (PLGA) was created on the basis of divisions of two departments. Scientific supervisor of her was appointed MF Volerner, deputy – MI Karnovsky PLGA consisted of two divisions, subordinated to two departments, respectively. During this period, the rise of research work MI Karnovsky at the department actually created the Kiev School of Statistical Hydroacoustics. A characteristic distinction of the department has always been the close connection of its activities with research work carried out in the Problem Laboratory of Hydroacoustics, the Kiev Scientific Research Institute of Hydraulic Devices and other profile organizations of the country. Mark Ilyich Karnovsky was the founder of the KPI Electro Acoustic Faculty.

Marna Ilyich’s fruitful scientific, practical, and pedagogical activity is well-known and acknowledged at us and abroad. Back in 1940-1948, his fundamental work on the directional properties of complex emitters, sound lenses, resonators and sirens appeared. Results of scientific researches MI Karnovsky and lecturers of the department were reported at international, all-union, republican and other conferences, symposiums, schools-seminars, published in many scientific journals. Scientific staffed by M.I. Karnovsky Departments were awarded with medals, diplomas, received hundreds of copyright certificates. In 1974 the department was awarded the highest award of the Exhibition of Achievements of the National Economy of the USSR – the Diploma of Honor. The publishing activity of the department at this stage was marked by the appearance of a number of well-known monographs created under the scientific guidance of Mark Ilyich: Integrators in measuring systems (1966), “The noise immunity of the typical signal detection path” (1971), “Designing acoustic antennas and transducers” (1975 ) Very important for students were MI Karnovsky teaching aids: “Distribution of sound in wave channels. Methodical instructions for the course “Theoretical Foundations of Hydroacoustics” (1981), “Green’s Function. Methodical instructions for the course “Theoretical Foundations of Hydroacoustics” (1984), “Propagation of sound in a randomly inhomogeneous medium. Methodical instructions for the course “Theoretical basis of hydroacoustics” (1985), “Reverberation of the sea. Tutorial “(1986).

The brilliant lecturer, erudite, a fine connoisseur of history, Mark Ilyich Karnovsky enjoyed the love and respect of students and numerous students. Mark Ilich’s civic position in the difficult years of democracy in Ukraine has always been a delight. And his extraordinary honesty and intelligence, deep knowledge and clarity of thinking, the ability to easily and efficiently tell about the most complex concepts of science, secured him the fame of the patriarch of the academic school of acoustics of Ukraine, whose achievements have gained world recognition.

This website uses cookies to improve your experience while you navigate through the website. Out of these, the cookies that are categorized as necessary are stored on your browser as they are essential for the working of basic functionalities of the website. We also use third-party cookies that help us analyze and understand how you use this website. These cookies will be stored in your browser only with your consent. You also have the option to opt-out of these cookies. But opting out of some of these cookies may affect your browsing experience.
Necessary Always Enabled
Necessary cookies are absolutely essential for the website to function properly. These cookies ensure basic functionalities and security features of the website, anonymously.
Functional
Functional cookies help to perform certain functionalities like sharing the content of the website on social media platforms, collect feedbacks, and other third-party features.
Performance
Performance cookies are used to understand and analyze the key performance indexes of the website which helps in delivering a better user experience for the visitors.
Analytics
Analytical cookies are used to understand how visitors interact with the website. These cookies help provide information on metrics the number of visitors, bounce rate, traffic source, etc.
Advertisement
Advertisement cookies are used to provide visitors with relevant ads and marketing campaigns. These cookies track visitors across websites and collect information to provide customized ads.
Others
Other uncategorized cookies are those that are being analyzed and have not been classified into a category as yet.
SAVE & ACCEPT